Bribar Table Tennis is delighted to announce that the UK No. 1, Paul Drinkhall has entered into a new partnership with the world class brand TIBHAR.

Paul is a four time National singles Champion and Commonwealth Gold Medal winner from Glasgow 2014, as well as being Great Britain’s sole representative in the London 2012 Olympics where he reached the last 32 of the Men’s Singles competition. 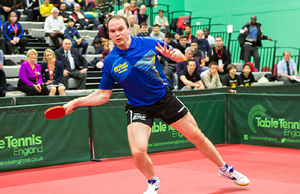 The 2014/2015 season has been Paul’s best ever to date – Paul became the first English player in nearly twenty years to win an ITTF World Tour event following victory in the GAC Group Spanish Open, before recording victories over both the European No.1 and No.2 ranked players Dimitrij Ovtcharov (World Rank 5) and Marcos Freitas (World Rank 9) on his way to the final or the GAC Group ITTF World Tour Russian Open.

Paul is a former triple European Youth Champion and current UK No.1 and holds a world ranking of 37, his highest being No.33 in January 2015.
TIBHAR is a leading brand around the world within table tennis and is renowned for producing top quality rubbers and blades along with a first class range of tables, textiles and accessories. Some of their other world class athletes include Vladimir Samsonov (BLR) and Chen Chien-An (TPE).

Paul commented: ‘I’m really happy to be a member of the Bribar Table Tennis and TIBHAR families. At this stage in my career it’s important I have the support of table tennis experts and that I’m playing with the very best equipment. In the UK everyone knows Bribar Table Tennis and the support they provide to their customers, so it’s great to be in partnership with them.  TIBHAR equipment is absolutely outstanding– the Evolution rubbers are the absolute perfect choice for my game, and I would recommend them to anybody who wants to play an attacking game based on power, spin and precision’.

Barry Chapman, Managing Director of Bribar Table Tennis, the main UK agents for Tibhar, commented:
“We are delighted that Paul has joined Bribar and Tibhar at a time when he is playing at his best.  As well as being an extremely talented player he is very personable and friendly and is about to enter a new phase of his life. He and Jo are expecting their first child in a few months time, and this has given him renewed focus. Paul is very enthusiastic about our plans for the future. More than anything else, I think he is looking forward to working within the family environment that Bribar and Tibhar offer.”